We believe that the development of the You Belong! System is crucial. It is also important to demonstrate that an entirely new approach is needed to the methods and funding of the projects dealing with social intervention. The development of the VH System however, is not an experiment. The activity of the foundation so far – including the operation and perspective of the Stúdió - has generated real, measurable changes in the lives of hundreds.

A well-functioning system could determine the development of the entire region and provide a model for the realization of the Central-European integration process.

We believe, it is possible that the You Belong! System could reform the effective use of resources and the course of integration. The model in Ózd, thus could generate real changes in Hungary and Central-Eastern Europe, through the social inclusion of the disadvantaged, primarily Roma groups.

Let's imagine the life possibilities, future and chances of integration of a Roma child born in this underdeveloped region. They are born into depressing circumstances, into a deprived place with no perspectives, future or success, especially since being a Roma child means having a negative identity, due to the everyday experience of exclusion and stigmatization. All in all, the stress and aggression level is getting higher and higher as well as there is a growing sense of lawlessness. Due to the low quality of the education, studying further and/or finding a job becomes impossible. This life is unworthy of humans. Although in the horizon they can see the promise of a different life, but it is only a privilege of the “luckier ones”, the average, white, mainstream children. That life is stimulating, wide, and free, where there is a future, perspectives and hope for success. However, there is a huge gap between these two worlds. If an underprivileged Roma child would still start off to get to the world of success, they would most likely fail to reach it. In order to get there, they would have to fight their social, housing and sanitary disadvantages, their systematic school failures and the laws of the ghettos. Statistics show that this is only possible for a very small number of children. Although, the success of every child is in the interest of the entire society, most of them are unable to get through. Therefore, we developed the VH System, because we believe that the success of the children is the main criterion for the birth of a successful society. Now, let’s imagine, that after recognizing this problem we build a very secure bridge over the huge gap. The disadvantaged child could already step on it in a fetal age through their mothers. On that bridge accordingly sits their developmental path, they would receive such a support that allows them to reach a life where the possibility of a successful future is present. This bridge is an exit for the children; also for their families and their communities.

The You Belong! System is this grand, safety providing bridge that relies on the services and programs provided by the System, which serve as its pillars. These programs respond to the problems and gaps met during the preceding long settlement work in the area. They provide support for the families and communities, whilecompletely satisfying the upcoming needs and requirements all along the development cycle of a child. 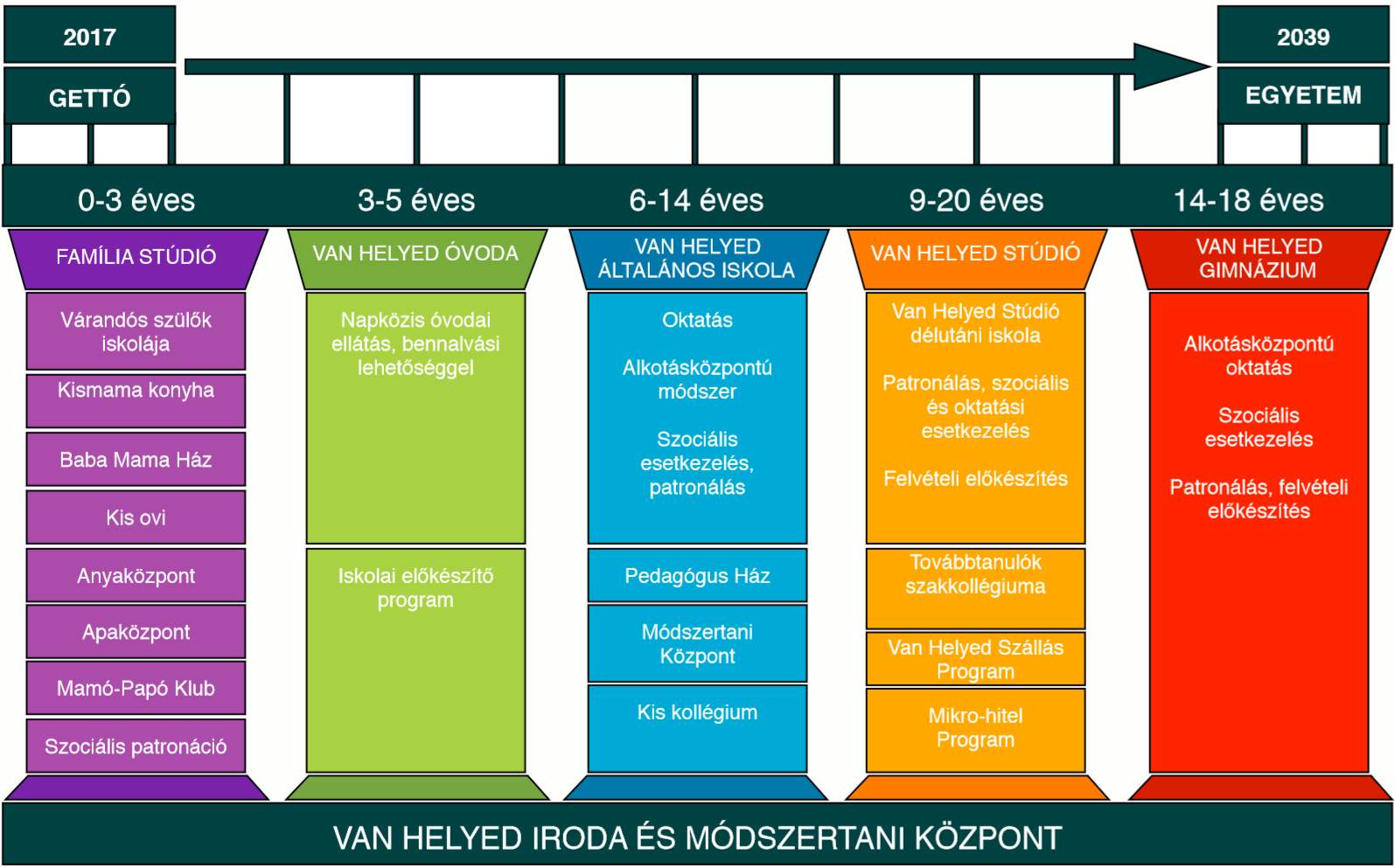 The inclusive and reflective pedagogical program of the Stúdió, enables the disadvantaged Roma children to acquire age appropriate knowledge, and enables them to enter high schools corresponding best with their abilities. Their preparation happens in the so-called Creative-Centre, an extracurricular, motivational, familial, educational environment. The core principles of the development are the personal and child-centred approaches that cooperate with the families, and handle the social disadvantages within both personal and small group sessions too. In the meantime, we are looking for the most adequate, higher quality, inclusive school and dorms, where children can continue their education. Their development is being monitored to ensure higher efficiency partisanship while partnering with the schools. We have also mapped the potential accepting institutions in order to build a network of cooperation. Our aims are, namely to empower students from underdeveloped regions coming from low-quality educational institutions, to be able to perform in high-quality schools. We are working diligently, so that after breaking out and studying further somewhere else, these students will become a developmental force of the region in case they return to their community someday. During the operation of the You Belong! Stúdió, we have established some other joint programs with institutions of the more developed regions. The aim of these joint programs is the facilitation of the inclusion of future pupils and increasing awareness of the students and teachers of these schools. These programs enforce successful inclusion, as opposed to austere integration.